Every organized sport or activity has eras defined by fundamental changes in the game. One of the biggest defining moments in poker was the 2003 World Series of Poker (WSOP) Main Event win by a previously unknown accountant who won his seat in a $40 satellite.

As a result of near-endless replays of the ESPN coverage of the event, Chris Moneymaker became a household name beyond the poker world, and the game of poker moved from the backrooms to a global spectator sport. The win and coverage caused a run on online poker accounts, and the early virtual game boomed as a result.

Watching this recap put together by PokerGO, it’s easy to see that Moneymaker got lucky in several spots, running well to spike his ace against legend Phil Ivey on the final table bubble, just as one example. But the footage also highlights a couple audacious bluffs and strong plays from Moneymaker.

It was a fairytale win at the time, as Moneymaker took out heroes of the game like the aforementioned Ivey, Johnny Chan, and Humberto Brenes before taking down Sammy Farha heads-up. But after it was over, the fairytale only grew as the promise of huge wins from a small online investment brought players out in droves, growing the game to previously unthinkable heights.

They don’t call it The Moneymaker Era for nothing. Catch the highlights of perhaps the most influential Main Event win of all time, the now-mythic 2003 win by the accountant from Nashville.

While there’s a lot of debate in the poker world about Phil Hellmuth's ranking among the top players, no one argues he isn’t an entertaining player. On or off the felt, Hellmuth is the kind of player that draws attention wherever he goes, not least because he actively seeks it in many cases.

Beyond owning the most World Series of Poker (WSOP) bracelets any human has ever won, Hellmuth is mostly known for the theater he brings to the poker rooms he plays in. From the beginning of his career, he’s been known as someone who doesn’t suffer a bad beat well, and his epic blowouts became legendary in the poker world.

Hellmuth’s unique combination of skill, luck, and ego came to a head in the mid-2000s when he started his tradition of bigger and bigger entrances to the WSOP Main Event. In 2005 and 2006, he arrived late for the game at the Rio in a limo, but things ramped up in 2007. 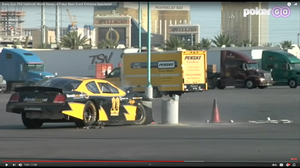 He’d have been forgiven for giving up his entrances after crashing a stock car in the parking lot the day before he was supposed to arrive in it, but he still showed up that year in a racing suit. “I thought I looked really cool when I was in control, and I looked really idiotic when I crashed,” Hellmuth said with a smile while chatting about the experience. “Kinda like when I’m playing poker.”

It was a moment of self-awareness, but from there, it just got weirder. Over the following years, he had turns as a Roman emperor and MMA fighter, among others, to start his Main Event experience, complete with a posse of beautiful women in costume joining him.

The debate about Phil’s play may continue forever, but wherever history lands on his position as a player, it seems clear he will be remembered as perhaps the most entertaining player of his era, and his grand, absurd entrances to the WSOP Main Event are a big part of the reason why. Catch a recap of some of his more absurd entrances in this video from Poker GO.

People love a bargain, and poker players love big value. This past weekend’s Half Price Sunday at PokerStars scratched those itches with bargain buy-ins attached to big guarantees.

Overall across New Jersey, Michigan, and Pennsylvania, there was $162,000 guaranteed in three feature events per market priced at half their usual value. Almost 4,800 entries across the three states meant there was actually more than $187,000 in prizes handed out.

New Jersey was a big standout for beating guarantees. The games in that state were more than 37% over the guarantees for the Half Price Sunday, with $36,384 collected against $26,500 guaranteed.

The games in PA didn’t best guarantees by nearly that much, but it saw the biggest Half Price prize pool of the weekend. The Half Price Sunday Special in PA piled up almost $80,000 for the biggest prize pool by far.

Get all the details from the pokerfuse rundown.

Comedian, movie star, and poker fanatic Kevin Hart dropped in on fellow partypoker ambassador Jeff Gross' podcast recently to chat about poker and life. For a man renowned for his comedy timing and “always-on” personality, Hart gives a remarkably thoughtful and serious interview.

In this compilation of clips from a longer interview Hart mentions how the Covid lockdown gave him a great chance to spend more time with family, and he realized that he hadn’t always put family first. “I was married to my career, dating my family. That has to be the reverse.”

On his love for the game of poker, Hart pointed to the inclusivity of the game as a main attraction. “Regardless of race, gender, anything, it’s a dope thing you can do with eight other people at a table,” he said. “So I, for one, think that’s amazing.”

If you’re used to Hart’s brash public persona, always ready with the loud quip, this interview will be a nice change of pace, showing a side of the comedian that isn’t always on display in other public settings.

Check out the clips below for a nice look into the mind Kevin Hart.

The recent PokerGO Cup was the scene of some amazing high-level poker, and the most recent hand posted to YouTube by the poker broadcaster is a great example. In the hand from the end-game of Event #2, Jason Koon is put to the test after a three-bet pre-flop was flat-called by Ali Imsirovic.

It’s the sort of “standard spot” that happens multiple times per game in poker, but Koon and Imsirovic show how much of poker is a pure mental game that has less to do with the cards than it does with the players involved. Koon seems to know exactly where he is, despite some inspiring play from Imsirovic after he flopped top-top with a dominated ace. Can Koon find a way to get rid of from the suited slick?

This is a great example of great poker minds battling at the highest level the premier broadcaster in the poker world, Poker GO. Check out the full hand at the link below, and watch Koon squirm post-flop as he tries to work out what’s going on.

Poker was a niche game before Chris Moneymaker won the 2003 World Series of Poker Main Event and turned the game into a global phenomenon.