This past weekend while in Las Vegas, Phil Hellmuth put his big boy pants on and spent his nights doing what he does best name-dropping and party-hopping.

On Saturday it was all things NASCAR as The Poker Brat found himself surrounded by the sports lead-footed superstars Jeff Gordon, Jimmie Johnson, Dale Earnhardt Jr. and Denny Hamlin.

Then the very next night, Hellmuth fought his way into the inner ring of UFC phenom and lightweight champion Anthony “Showtime” Pettis.

Of course, Hellmuth couldn’t resist (but who could?) snapping a pic with the UFC Lightweight Championship Belt and while he doesn’t look thrilled (perhaps because he’d just gotten pushed in the face the night before) “Showtime” posed for a pic with the Brat. 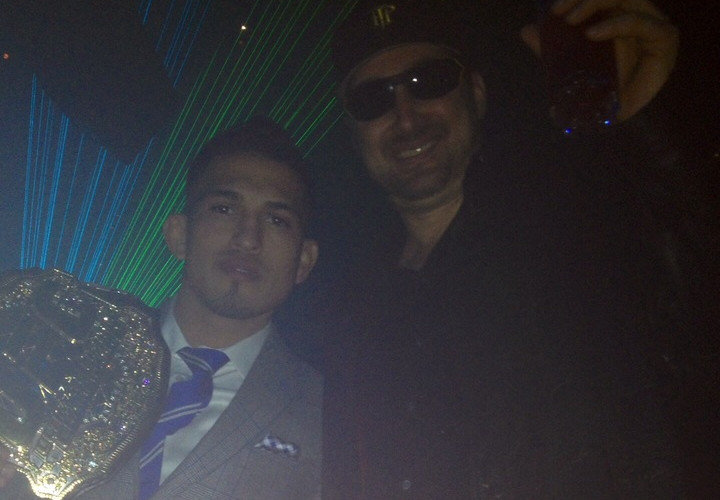 When all was said and done though, Hellmuth returned to Palo Alto, CA and reiterated that while partying like a rock star can be fun, there’s no place like home.

Patrick Leonard realises Stars made a mistake putting him at the top of the SCOOP leaderboard.

Phil Ivey, one of the most successful poker players in the world, has come out publicly to announce his affiliation…

After being down nearly €1 million in the heads-up PLO challenge versus “VeniVidi1993“, Galfond pulled off…

Last week on the special edition of the Pokerfuse Podcast, our host Michael Gentile sat down with former Head of…

In just a few hours, the much-awaited second Annual Global Poker Awards will be held live in Las Vegas at the PokerGO…

Let’s have a look at how PokerStars has changed in 10 years.

In case you missed out on the Final Table stream of the PokerStars Players No Limit Hold’em Championship (PSPC) event,...