PokerStars is at it again, this time innovating the game of poker by adding an insurance option to some of its play money cash tables.

You can see exactly how it works below or read more about it on pokerfuse.

All-in Cash Out lets players in an all-in situation with no more action pending get cash equal to their hand’s equity by paying a 1% administrative fee and giving up their hand. If after buying the insurance their hand wins, PokerStars gets the pot, but if the hand loses, PokerStars takes the loss instead.

The new feature recently debuted at selected 6-handed No Limit Hold’em tables and it is slated to hit Pot Limit Omaha and No Limit 6+ Hold’em cash games soon.

Eventually, All-in Cash Out is expected to make it to the real money games in jurisdictions that allow it.

The £1 million buy-in Triton Million charity event enters Day 2 and you can watch it for free on PokerGO.

In this pros vs businessmen (and one businesswoman) event, its full-time businessman and part time poker player Bill Perkins with the chiplead.

While you can’t watch it here, you can catch the action on PokerGo by clicking here but stay away from social media because this tournament is on a delay.

Taking place at the London Hilton Hotel at Park Lane, the charity event features a record-breaking £1,050,000 buy-in which equates to approximately $1.2 million, making it the most expensive buy-in in USD and only the fifth seven-figure buy-in event ever.

54 players signed up for this iconic event, meaning the event generated a staggering £54 million—almost $66 million when measured in dollars. The event raised £2.7 million for charity cause thanks to £50,000 entry fee taken from each player’s entry.

Triton Million London event becomes the sixth-largest prize pool in the history of poker (as per the Wikipedia ) and the largest poker tournament outside the WSOP.

The winner of this historic event is set to receive £19 million—which equates to $23 million in USD—the biggest first prize for any poker tournament. 11 players will make the money. 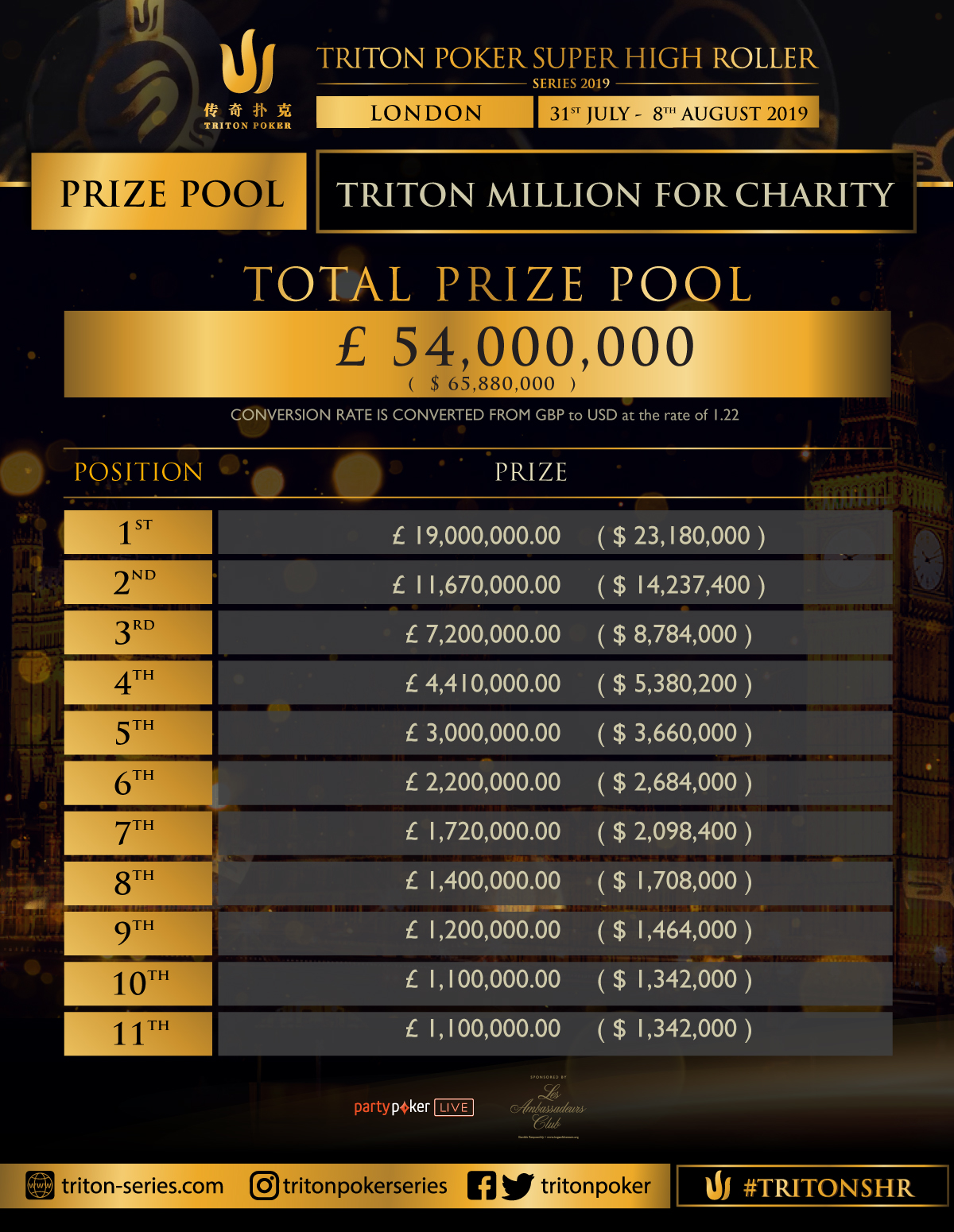 The previous record for the largest first prize payout belongs to another seven-figure buy-in $1,000,000 Big One for One Drop held in 2012. Antonio Esfandiari took down the event for $18.3 million.

At the time of writing, two players have already hit the rails including the legendary and brand ambassador of Triton Poker Tom Dwan. Rick Salomon was the first player to be eliminated.

For other platforms, visit here

Have you ever wanted to know why Daniel “Jungleman” Cates was dubbed Jungleman in the first place?

Over in Instagram, Cates shares the story about his infamous moniker.

The real story is that when I first played poker, I was a lot different of a person. I was very unkempt, had longer hair, and seemed like a bizarre person. I think at some level that my opponents called me “jungleman” as kind of a way to mock me for these reasons.

If you are looking for more on Jungleman, check out this video from the World Series of Poker.

💪 @junglemandan 🇺🇸 will be swinging into London to win the 🔱 Triton Million for Charity! Can he take down the Bigge… https://t.co/VfyEcPXtFG— Triton Poker (@tritonpoker) July 26, 2019

The event is an invitational and will be held at London Hilton on Park Lane on August 1 to 3.

Thanks to Talal’s selection process and the generosity of my investors, 10% of my action will be donated to one of… https://t.co/ngYb0nwrDB— Igor Kurganov (@kurganovigor) July 29, 2019