Players on PokerStars Italy can now throw objects at each other by clicking on the flying “horseshoe” icon available next to their screen name and selecting the item from a drop-down menu.

Players can throw a rose, a horseshoe, a fish and a cream pie at opponents, and they come with sound effects. Players can drag the object, aiming with a crosshair, to throw the item of their choice at any seated player.

As reported on Poker Industry PRO, the rose and horseshoe are unlocked for all players and have a “cool down” timer to prevent overuse. Players must complete a challenge to be able to unlock the fish and pie.

Take a look below. 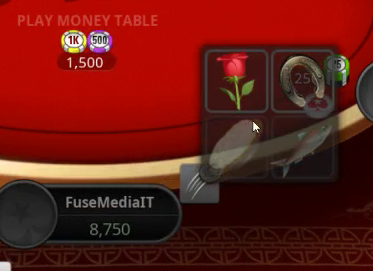 After a two month hiatus, Poker In The Ears hosts Joe and James are back and are joined by Hollywood director Joseph Kahn.

Kahn talks about his work as a director which includes credits such as directing music videos for the likes of Taylor Swift, Mariah Carey, George Michael and Eminem—along with his passion for poker.

Since PARASITE won the Oscar, I have been charging to talk to an actual Korean. This white guy @Stapes paid $750 an… https://t.co/q99racAv3k— Joseph Kahn (@JosephKahn) February 11, 2020

Did you know back in the day, Kahn even directed a PokerStars advert?

You can listen to the Poker In The Ears podcast below:

Partypoker has announced Jordan “BigBluffZinc” Drummond as their latest signing to their Team Online stable.

Drummond is a well-known professional online poker player and a coach with over ten million dollars in winnings.

In 2012, Drummond founded BBZ Staking and Coaching, one of the elite coaching and staking platform available today.

The Canadian poker player is known to have staked, mentored, and coached hundreds of players and is widely regarded as one of the best online poker players.

He also regularly streams his gameplay on Twitch on his channel.

Welcome to @ppteamonline Jordan Drummond aka @Bigbluffzinc who joins us today. He is streaming from 19:15 CET (10.1… https://t.co/F9T7PJgMXW— partypoker (@partypoker) February 09, 2020

This is partypoker’s first ambassador signing of this year. Its Team Online roster now expands to 13 members.