It was the last thing Danielle Anderson was expecting when ex Full Tilt head honcho Howard Lederer came and sat at her table at the WSOP Main Event on Monday.

She wasn’t happy about it— whether he had issued an apology to the poker community or not.

Anderson was a prolific online player before Black Friday and has since moved to playing on the cash game circuit.

Clearly still feeling raw from the Full Tilt sh*t storm that Howard Lederer was responsible for, Anderson was vocal at the table at her distaste for having to sit near him.

He hasn’t caused enough pain? He has to show his face & be a constant reminder to the worst time of my fucking life? So fucked.— Danielle Andersen (@dmoongirl) July 11, 2016

Not prepared to remain silent, Anderson asked Lederer questions most had been thinking:

Me: 'does it not bother you it’s physically painful for people to see you? Like I actually am sick to my stomach right now bc you’re here?’— Danielle Andersen (@dmoongirl) July 11, 2016

Howard nods & quietly says 'yeah it bothers me.’ Me: 'then why are you here? The least you can do is leave us alone.’ No response.— Danielle Andersen (@dmoongirl) July 11, 2016

Bagged 69k. More importantly, didn’t get arrested or 86’d & handled myself w/ as much dignity as I possibly could under circumstances.🙁— Danielle Andersen (@dmoongirl) July 11, 2016

Anderson has also appeared in the documentary Bet, Raise, Fold that raised from the ashes of Black Friday. This was her last tweet on the matter and parting shot to Lederer.

Turn whatever it is you’re listening to off and press play on this great podcast featuring a conversation between Lee Davy and Daniel Negreanu courtesy of Calvin Ayre.

Davy and Negreanu talk about everything from what makes a legend a “legend”, how the political landscape in America is terrifying, Racism, Sexism, Altruism, how having an opinion these days, especially on Twitter, can be dangerous (although Negreanu doesn’t care) and why marijuana should be legalized. And that’s only half of it.

One lucky winner will receive 3% of Doug “WCGRider” Polk’s World Series of Poker Main Event Action if they follow and retweet him on Twitter. It’s as simple as that.

Doug starts Day 2C on Thursday with a 110k stack.

Polk is having a good WSOP so far, as he and teammate Ryan Fee captured WSOP gold in Event #61 $1,000 Tag Team No-Limit Hold’em.

This is shaping up to be a good run for Polk who also recently released his new podcast “This Week on 2+2” covering all the latest Polker news as well as having run a successful first event for his new venture Upswing Poker.

The meet and greet was held inside the Encore Players Club at Wynn Las Vegas allowing Upswing Community members, poker pros and industry professionals to celebrate the launch of UpswingPoker.com —a poker training site co-founded by Polk, Fee and Matt Colletta. 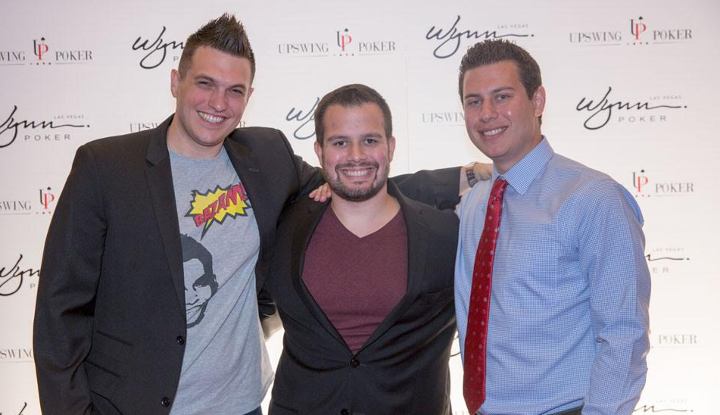 Phil Ivey returned to The Rio yesterday as he entered Monday’s Day 1C event at The WSOP to fight his way to the top.

Plagued with cheating scandals on both sides of the Atlantic, Ivey looked trouble free as he returned to the Rio and bagged 26,100 chips at the end of the day.

He had quite the rail of supporters.

If you’ve been anywhere near Twitter recently you may have noticed that it is a fairly tempestuous place at the moment—especially if you’re part of the poker community and happen to have an opinion on any subject, poker related or not.

Xuan Liu summed it up best, when she said last month:

One of the most notable was Cate Hall and co. facing off against 888’s poker ambassador Jessica Dawley—when the latter took to Twitter to see if there were any females who she didn’t yet hate or who had slept their way to the top of poker as MTV awaited. That didn’t go down well and the tweet has since been removed.

Since then Marty Derbyshire from PokerNews called Hall a “Social Justice Warrior” (she seems to attract a Twitter argument like a moth to a flame) among other things in a recent op ed.

A whole world of pain ensued—including the op ed being edited.

PN just republished this w/ @MartyDerby smear piece against me as lede. Don’t even know what to say at this point. https://t.co/7aXjd3NGLM— Cate Hall (@catehall) July 04, 2016

By all means, let’s save the mud-slinging and personal attacks for the medium to which only you have access. https://t.co/AE3vap2KHN— Cate Hall (@catehall) July 02, 2016

Posting that @PokerNews article is the worst decision I’ve witnessed this WSOP
and I saw a woman sunbathing in the dog relief area last week— Jamie Kerstetter (@JamieKerstetter) July 02, 2016

If @pokernews attacked me everytime I made a bad joke like they did @catehall today, I would be totally out of business.— Matt Glantz (@MattGlantz) July 02, 2016

I am open to hearing the other side of the argument regarding my take in this op-ed. For everything else, the shop is now closed.— Martin Derbyshire (@MartyDerby) July 02, 2016

And that’s only some of the Tweets.

Although the spat seemed over, over the weekend, Hall took to Twitter with this—one for Derbyshire me thinks.

Even Joey Ingram is noticing how heated Twitter is getting—check out what he has to say in his latest new-style pod with Adrian Fenix.

The latest competition from Poker Central is giving you the chance to win a phone call with either Phil Hellmuth, Antonio Esfandiari or Daniel Negreanu. All you have to do is post a short video, photo or text including #AskThePokerPros asking them an interesting or unusual question.

The contest will last 3 weeks, and will be divided into 3 weekly parts:

So far it looks like the questions for Hellmuth are being kept very pc with nothing controversial being asked…but it does say you can ask them anything.

Phil, which bracelet win has meant the most to you? #AskThePokerPros— Peter Demetrious (@ozilisafrog) July 08, 2016

#AskThePokerPros do you still think you are the best poker player in the world? Or how high would you rank yourself, top 3, top 10 etc?😄— Sander Aamodt (@sanderaamodt) July 08, 2016

#AskThePokerPros Phil, do you enjoy the banter with those trying to “egg” you on or do you prefer a quiet table so you can focus? Thanks!— Dan Picard (@twoblindrefs) July 08, 2016

Think you can do better? You can enter via their contest page or through Facebook or Instagram using the hashtag #AskThePokerPros.

You can check out all the rules here.

Despite finishing second in Event #60 against David Prociak (but don’t feel too bad for him, Shack-Harris won Event #51 last week for $894,300) he absolutely won best-dressed player, and still walked away with $96,750 in prize winnings.

It’s the most entertaining outfit I’ve seen at this year’s series since Kevmath showed us his deepstack outfit last month.

When you are sitting a Final Table and bust out in third place, seeing your habibi getting down on one knee to propose is probably the last thing you are expecting.

But that is exactly what happened over the weekend at the WSOP to Natasha Barbour.

Read the full interview with Mercier following his proposal over on the PokerStars Blog.

Congrats to the love birds.