After having accepted the 12 challenges set up by the “Poker Gods”, online Twitch streamer and Run It Up Ambassador Arlie Shaban successfully completed his first challenge.

The first challenge was not so easy as he was tasked to “Skin the Dutch Lion” meaning he had to beat the legendary Dutch Twitch streamer Lex Veldhuis in a heads-up match.

The Canadian streamer took a while to figure out his first challenge but when he did, he showed no fear and immediately sent a heads-up match request to Lex.

On Tuesday, the duo met each other in a battlefield streamed live on Twitch with fans cheering for both. After battling it out for half an hour, Arlie eventually won the heads-up match as he slayed the Dutch Lion on his first challenge.

Here’s a recap of what happened:

It appears that Run It Once Poker could have a total of six angles of how it displays the community cards on the board thanks to the image assets of the new RIO poker client spotted by F5.

Ever since Phil Galfond gave a sneak peek of the upcoming RIO poker software, the the idea of slanted or “tilted” community cards displayed on the board has certainly proved to be divisive. Many players took to social media and forums to voice their dislike of the style.

Traditionally in online poker, even if the table and players are presented in a tilted perspective, the cards are shown top-down. Run It Once Poker appears to be bucking that trend, with the current beta test showing angled cards.

Well, it seems either the operator is considering changing this view, or may give players the option. Six options to change the angle of the community cards including an option with “No Angle” (see screenshot below).

(Of course, we could be totally wrong about that, and maybe they are used for animations, the hand history viewer, or some other purpose. But hey, at F5 we’re all about the speculation!)

What do you think, should Run It Once switch to a no-angle design? Tell us on Twitter.

And if you want to learn more, check out Run It Once Poker: Everything You Need to Know on our big-brother site, pokerfuse. They answer all the questions you can think of (and probably some you can’t) about Phil Galfond’s ambitious new venture. 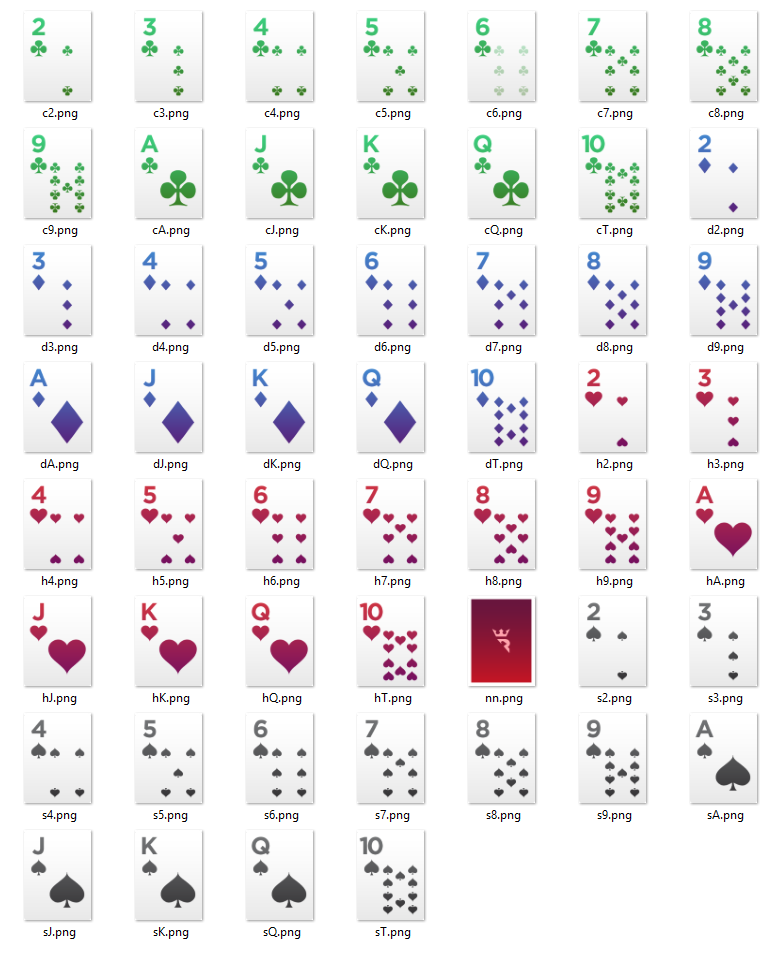 Short Deck Poker, also known as Six Plus Hold’em, a game that has been become quite popular over the last year both live and online, could make its way into the Run It Once Poker game offerings.

“We won’t have short deck at launch or soon after, but it’s definitely one of the games I’d be interested in adding,” Phil Galfond commented on Reddit when asked if there’s any plans to add Short Deck Poker.

It looks unlikely RIO will add this game any soon. The first phase will only see cash games. Tournaments and Sit & Go’s will be offered during Phase 2. After that, the poker room will certainly look at expanding into more popular formats—it will need to consider fast-fold poker (aka Zoom), lottery sit and gos (aka Spin and Go) as well as popular emerging formats like Short Deck. But it seems like its definitely on the radar.

Short Deck is expected to launch on PokerStars in the future. It recently went live on Americas Cardroom and is also spread on the iPoker network.

Jason Somerville’s Run It Up roster of streamers keeps expanding as his team has signed up three prominent Twitch poker streamers within a span of two months.

First to join the team was Arlie Shaban – a poker streamer from Canada and a former Big Brother Canada contestant. Arlie known for his enthusiastic and passionate energy in his Twitch streaming came into the limelight when he completed an unbelievable challenge of streaming poker for 1000 hours over 125 consecutive days.

Extremely honoured to represent @runitup as their ambassador!! The people that work for RIU are the coolest people… https://t.co/JXhbLPmDbR— Arlie Shaban (@ArlieShaban) August 02, 2018

He became the first non-PokerStars Team PRO to become the ambassador for RIU. Read more about his recent “12 Labours of Arlie.”.

Next to join the team was Matthew Staples who learned poker from his elder brother Jaime Staples, a long time poker streamer and a Team PokerStars Pro.

Matt started his poker career by streaming micro-stakes tournaments on Twitch and since then he has been streaming regularly to build his own Twitch community. He now has over 43,000 followers with over 2.2 million views.

We are thrilled to announce @MattStaplesPKR has joined us as a Team RIU Ambassador! Please welcome Matt to the team… https://t.co/QtHSd5cmz4— Run It Up (@runitup) August 31, 2018

The brothers won a crazy prop bet with Bill Perkins in March this year and walked away with $150,000. The challenge was to weigh within 1 lb of each other. It was never easy for them as Jaime weighed 305 lbs and Matt weighed 134 lbs before accepting the bet.

The latest to join the roster is Ricky Guan who plays under the screen name “ratedGTO.” The 24-year-old streamer is based in New Jersey and streams his online play on most of the Garden City-based online sites.

We are pleased to announce @ratedGTO has joined us as a Team RIU Ambassador! Please welcome Ricky to the team and w… https://t.co/PAPRaakMeQ— Run It Up (@runitup) September 13, 2018

Ricky has racked up over $250,000 in live earnings with the biggest winnings coming last year when he finished sixth at the Borgata Spring Poker Open Championship event for over $73,000.

In a bid to promote the partypoker MILLIONS stop in the UK, partypoker ambassador Sam Trickett has given an interview with tabloid, The Daily Star where no one seems to mention the stop at the Dusk Till Dawn Casino, that starts September 29.

Instead of focusing on the whopping $5 million guaranteed Main Event and £8.5 million that is guaranteed over the course of the entire event, the rag decides to focus on how many houses Trickett owns and the cost of his cars.

For more info on the partypoker MILLIONS stop you can check it out here.

Nine High Like a Boss William Kassouf who made a name for himself back in the 2016 World Series of Poker has acknowledge that he was caught cheating whilst drunk playing casino games over the weekend.

It is with great sadness that I write the following statement but I feel it necessary to clarify the situation now… https://t.co/cab2mYmRMK— William Kassouf (@WilliamKassouf) September 18, 2018

And was followed up by a video from Thomas Keeling.

Although the claims were unconfirmed for some time, Kassouf took to Twitter today to acknowledge wrong doing —although he omitted to clarify any of the specific details surround the cheating scandal.

After finishing his up his bankroll challenge after a nearly 2 year grind Doug Polk has announced he is taking a hiatus from poker.

Ever polarising, Polk’s departure from poker may please some people (we are looking at Daniel Negreanu here —as the pair have had some public beefs in the past, especially when it comes to rake ) but in the main, will the poker community be sad that Polk is moving into the mainstream?

Lex made it into Day 2 along with 247 other players competing for a massive $1.5 million first-place prize. He started his second day with over $2 million chips and was guaranteed to take home at least $11k.

Unfortunately, luck didn’t favor him as he lost as a 60-40 favorite with AK to Q9 suited to finish with just over $28k in winnings. 17 players remain in the tournament and will battle it out today, with each guaranteed to win at least $57k.

During his five hours of the stream, Lex peaked at around 34,000 concurrent viewers and gained 592 subscribers and over 4.5k new followers. The Dutch pro almost broke legendary poker live-streamer Jason Somerville’s record of the most concurrent viewers—37,000—which he attained during WCOOP in 2015.

All is not over for Lex, as he plans to play his biggest tournament buy-in ever. Tonight he will be streaming WCOOP-62-H [High Roller] which carries a massive $25k buy-in with a guarantee of $1.5 million.