The newly launched online poker room, Run It Once Poker is gearing up for its second software upgrade since it went live publicly in February.

Earlier this week, Phil Galfond, the founder of RIO Poker room, along with several other RIO pros hosted a 24-hour charity stream on Twitch to raise money for Sinai Health and StrongMinds charities.

Along with several improvements to the room, the new build includes six new table backgrounds, a new splash pot theme with new sound effects and several other fixes including stability improvements and bugfixes.

The new splash pot theme gets activated only if the splashed pot size is 100 big blinds or more. According to Phil, the new theme has been designed to make it more distinct than the smaller splashed pots.

Other features such as resizable tables, new replayer, ability to download hand histories will be included in the following build, Phil said in the stream.

The new update is expected to go live anytime soon.

Here’s a clip of Phil testing out the new RIO Poker client:

And then soon afterwards, all the videos were removed.

The information that we heard: Ecology changes to come into effect on May 28. That will include all users being prompted to change their screen names on that date.

That information is not particular surprising—pokerfuse talked about this happening last month, and even the May 28 date has leaked out before.

But we didn’t watch all the videos in the Instagram story (there were a lot!). Apparently, according to other users, he later clarified The new hand replayer would go live on May 28, then two weeks after that—June 10—the ban on HUDs and third party tools would come into effect. The two week gap between software update and official ban is new detail.

But why were the vids pulled? Official spokesperson Colette Stewart explains:

Some details were correct, others were not. All information will be shared via our social and PR channels at a later date I can not confirm any timelines or further information

So there you have it. Or, there you don’t. Either way, it’s happening. Soon. Ish. Probably!

See also: Partypoker MILLIONS Online is coming back with another $20 million guarantee! But then maybe its not? Oh no it definitely is!

The much-awaited 6+ Hold’em MTTs have been finally deployed on PokerStars clients. 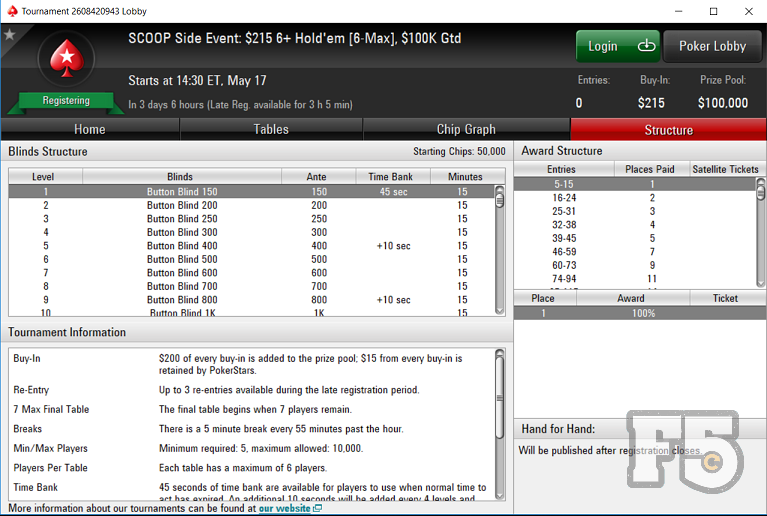 These events are being labeled as SCOOP side events to the ongoing Spring Championship of Online Poker (SCOOP). From what we understand, these tournaments are not officially part of the series.

Just as pokerfuse (our sister site) speculated, 6+ MTTs have adopted button blind structure. In this structure, there is no small or big blind, instead, every player on the table pays an ante while the Button pays an additional ante that acts as the only blind.

Currently, these tournaments are not available to Bulgaria, Estonia, Sweden players.

Recently the US Government “officially acknowledged “professional poker player as a new job.

It seems that Daniel Lupo, a poker player based in New Jersey has started to take his job seriously.

Daniel who goes by the screen name “AvaGray” is having a dream run at the ongoing PokerStars’ NJSCOOP series.

He has shipped five NJSCOOP titles and has made multiple final-table finishes in a span of just a week. His incredible run started on May 5 bagging two NJSCOOP titles and two third-place finishes. He continued his form on May 8 shipping another two events, taking down one more event on the following day and another final table finish on Sunday night.