This Sunday marks the 8th Anniversary special edition of the PokerStars Sunday Storm.

In celebration, PokerStars has added a guaranteed prize pool of $1 million, still with an $11 buy-in. The tournament kicks off June 16 at 14:00 ET.

Satellites are still running for those that wish to try and win their way into the tourney. Daily $2.20 Mega Satellites are one way, and special Spin & Go tournaments (available for a $0.75 buy-in) offer another path to the Sunday Storm with direct entry prizes and satellite tickets as well.

The iconic Sunday staple first appeared just weeks before Black Friday back in 2011. PokerStars put together the following infographic to commemorate the occasion. 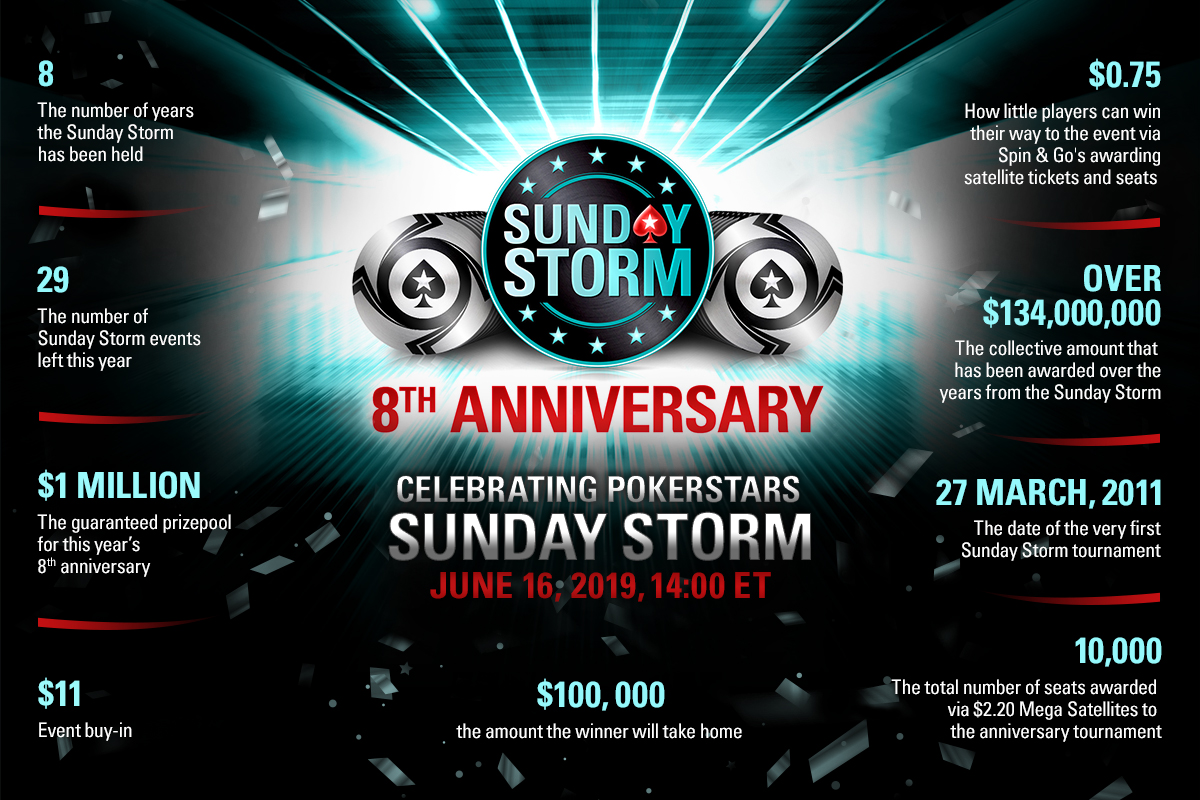 On June 11, partypoker SPINS millionaire hit its highest multiplier ever in a $5 tournament triggering a massive $1.2 million prize pool.

James “James23C” Carmichael from the United Kingdom, “elielalbiter” from Mexico and “nilverlobo” from Peru were the lucky players to hit the massive 240,000x multiplier.

After a few minutes of intense play, James took down the three-handed tournament for a life-changing prize of $1 million.

Second and third place ended up with an impressive $100,000 payday for their efforts.

“My life will never be the same again,” James said. “When I realised I was playing for the million I thought, what is going on?!”

The odds of hitting such a huge multiplier is 1 in 1,000,000. The room took only four months to hit its first seven-figure top prize pool.

Twitch poker favorite Arlie Shaban, not six months on from shipping a Platinum Pass and playing in a $25k buy-in event, barely one month after getting signed up as a PokerStars ambassador, has completed the streamer triple crown: Hitting the donation jackpot from one lucky benefactor to the tune of $2420.

Here’s the moment in all its glory (warning: profanity abounds!)

The generous donator, yanksfan420, wanted him to play 20 $100 Spin and Go Max’s—and gave him the money to do so. It is by far his biggest donation to date.

Naturally, the PokerStars blog itself picked up the story, and apparently said the money was earmarking the gift for him to play in the Spin & Go 20 challenge on PokerStars. (that’s not clear from the Twitch clip shared, but the fact that it’s 20 spin and go max tickets gifted some seem to suggest a connection here)

What is Spin & Go 20? PokerStars is glad you asked—it’s a new promotion where your results from your first 20 spins of the day (including but limited to Spin and Go Max) count towards a leaderboard with $16,000 prizes given away each day. Arlie’s gift gives him all the buy-ins he needs to compete for a top tier prize one day.

Now the cynic in you might wonder if in fact yanksfan420 is a PokerStars stooge and this is a way of promoting the new games. But Arlie’s reaction certainly seems genuine, so we can say with confidence that, even if that is the case, he wasn’t in on it.

And let’s be honest, I doubt he cares too much, and those 20 high stakes sit and gos will certainly provide some great entertainment for his viewers.

The pair got into a two hour marathon session where the boys talked travel, fake positive people, the GPI awards and almost everything poker related in between.

The poker gods must be looking down upon us, as Polk returns this Friday (June 14) to Ingram’s podcast. Set your reminders for 2pm EST as shots are sure to be fired.