20% of PokerStars players have been randomly selected to try out the operator’s new rewards system that switches back to a traditional volume-based loyalty scheme.

The trial will run until the end of September in its global markets and in the European segregated markets. If the trail is successful a new version of PokerStars Rewards will roll out globally to the rest of the player pool.

For the full story go to pokerfuse to get all the nitty-gritty.

History has been made during the latest Main Tour stop of the World Poker Tour at the Venetian in Las Vegas. For the very first time, three women reached the six-handed final table of an open event and took home a sizable portion of the prize money.

Live poker in Sin City is booming during the summer months despite the absence of the World Series of Poker. The flagship WPT Venetian Main Event cost $5,000 to enter and attracted a field of 1,199 entries, of which 150 players earned a portion of the $5,545,375 prize pool.

Once the tournament stopped for the night with six contenders remaining, a historic line-up was confirmed.

Kitty Kuo, Daniela Rodriguez, and Kyna England were among the hopefuls to become the second female winner of an open WPT Main Event. Kuo’s chances were dashed in a confrontation with Rodriguez and she bowed out in sixth place for $192,855 in her third final table appearance.

Colombia’s Rodriguez was the next casualty and earned a payday of $252,945 as her first-ever WPT cash. Likewise, England also recorded the first WPT Main Event cash on home soil and finished in third place for $448,755.

In a short-lived heads-up duel, Chad Eveslage defeated Mike Liang to earn his first WPT title and the top prize of $910,370. He has also taken over the top spot in the WPT Player of the Year points race.

The next Main Tour stop is slated to take place from July 23 to 27 at the Choctaw Casino & Resort.

A historical day on the WPT ✌️

If you’ve been hungering for some World Series of Poker (WSOP) action, PokerNews has you covered a couple ways. Not only is PokerNews providing its usual stellar service with live reporting updates on the blog for all events, but Jesse Fullen has also been streaming cards-down action from WSOP.com's domestic bracelet series on PokerNews’ Twitch and youtube channels.

Guests on the stream so far have included poker media guru Kevin “kevmath” Mathers, and Henry “GTO Commentator” Kilbane, so the action is well documented with Fullen acting as host. Mathers is best known for his ubiquitous command of poker statistics on social media, and his work as the face of the WSOP Twitter account, while Kilbane’s voice will be familiar to anyone who watched pre-pandemic Unibet Open coverage.

PokerNews has always been the home of live reporting for the poker world, and the PokerNews Twitch/youtube channel now gives fans another way to follow the action. Catch Fullen and his guests daily at the PokerNews channels daily through August first for online WSOP action!

The latest edition of The Lock-In features the creative brains behind Poker King Media, Thomas Keeling. Keeling joined hosts Dara O’Kearney and David Lappin on the recent episode to talk about his work with Joey Ingram and Poker King Media, as well as some hints on the WSOP.

The Chip Race hosts started the episode with a tribute to Irish poker legend and 1999 WSOP Main Event Champion Noel Furlong. The Unibet ambassadors remembered a friend and a giant of the Irish poker world, with O’Kearney joking about how he could get under the skin of other players, to the point he got a less than complimentary mention in Doyle Brunson's Super System.

When Keeling joined the hosts, he dropped a tantalizing hint about an upcoming Tom Dwan interview. He said Dwan was still finalizing approval for a few stories, which might indicate there are some fascinating stories upcoming from Dwan’s time in the the high-stakes private-game world.

When asked if he had any tips for the upcoming WSOP, Keeling came clean. “I have no fucking tips,” he said with a smile, adding that he’d never played the WSOP but that it was on his bucket list.

Check out the full discussion on The Chip Race youtube channel.

Over the 10 year history of the Global Poker Index (GPI), there have only been 20 players ranked #1. The most recent is 2013 WSOP Main Event Champion Joseph McKeehen, named last week when GPI reset the rankings for another season.

McKeehen takes over the top spot from Alex Foxen, who won it in back-to-back seasons. The only other player ranked #1 since April 18, 2018 is Stephen Chidwick, so McKeehen joins a rarified group as only one of three players to hold the #1 ranking in more than three years.

There was also a change on the women’s side of the board. Nadya Magnus took over the #1 spot from Kristin Bicknell, who spent an astonishing 144 consecutive weeks as #1.

The newest season of GPI kicked off on July 1st, and Ali Imsirovic is leading the pack so far for the 2021 GPI Player of the Year, with Magnus leading the women’s side. Stay tuned to GPI to find out if they can hold on for the titles. 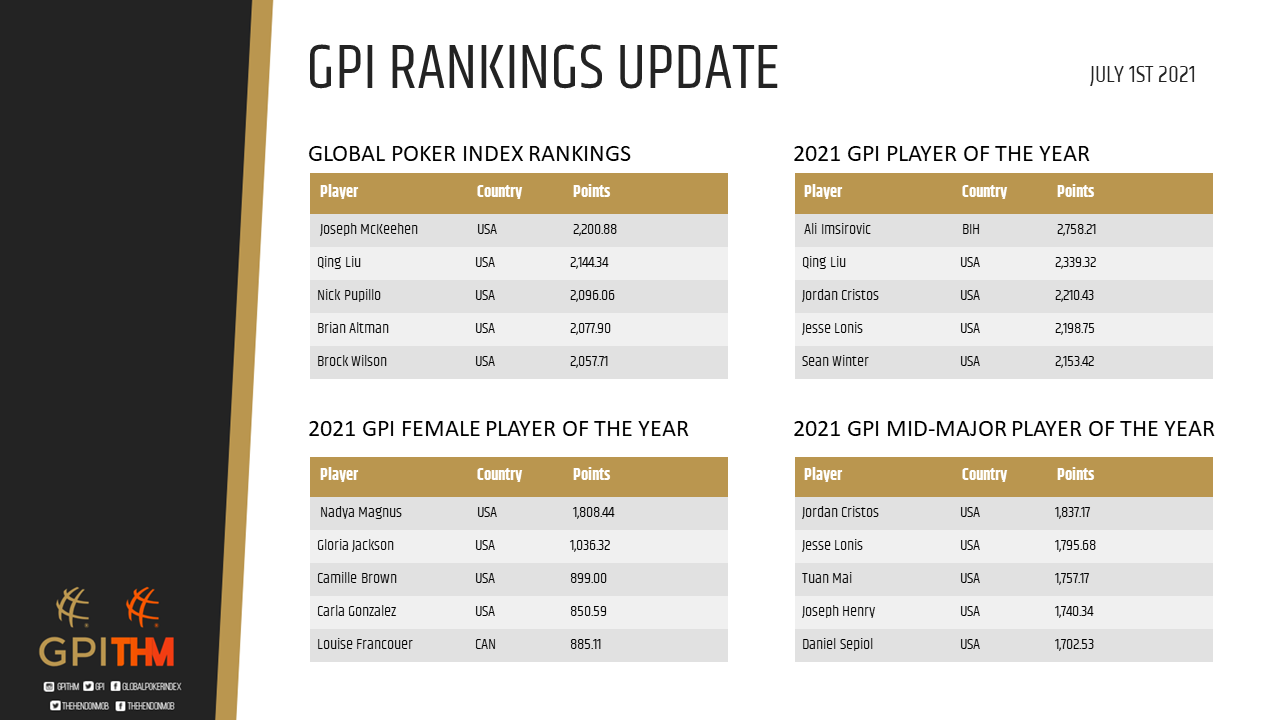