PokerStars free-to-play Virtual Reality poker product, PokerStars VR gets a new update this week and it is absolutely breathtaking.

PokerStars’ Galaxy Space station adds in a variety of new features and items as well as a completely new variety of accessories including clothes, hats, and props.

Players can now buy all the props, apparel, and consumable items starting at $1.99 thanks to its new “Stars Cred System”. 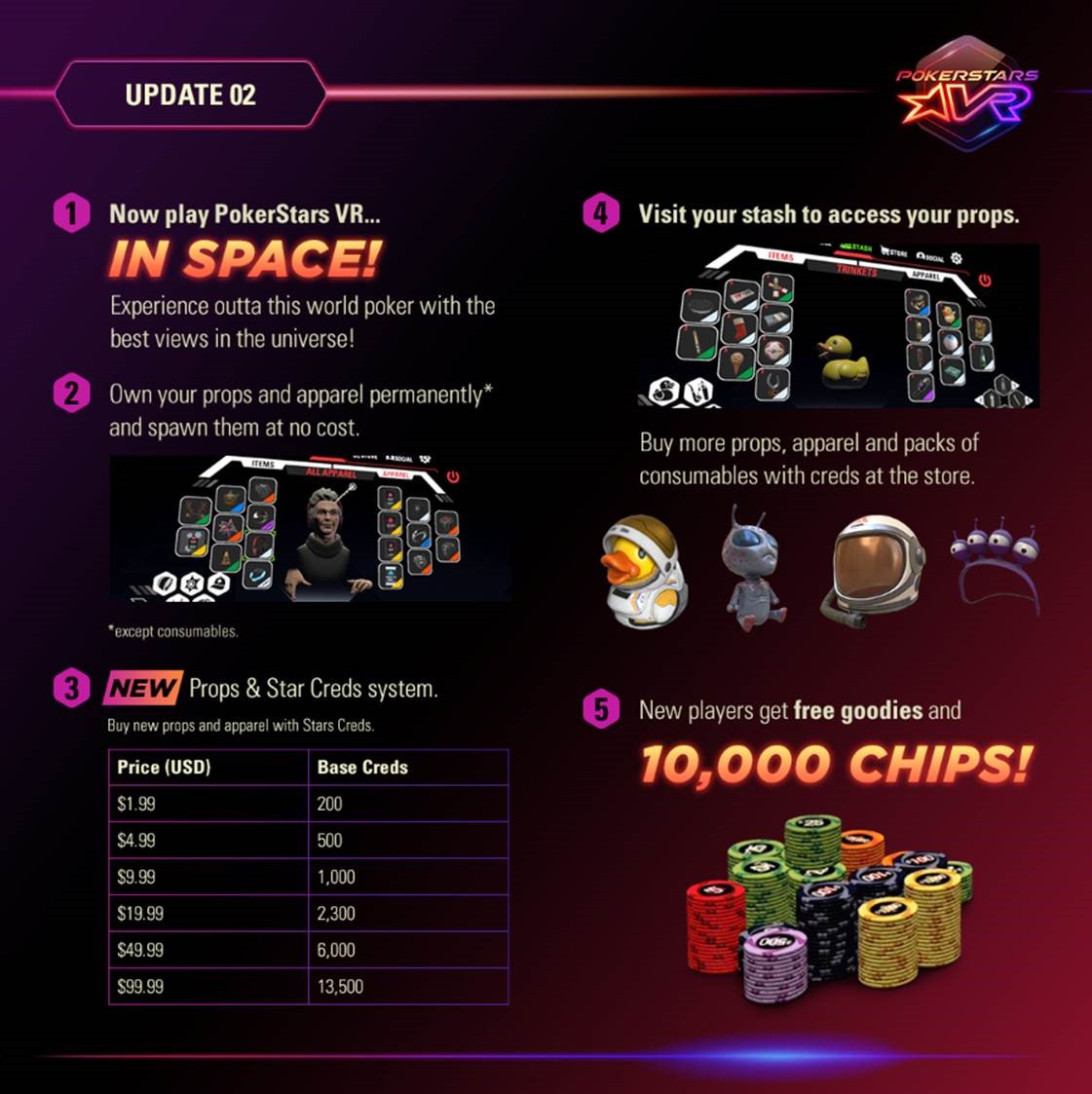 “The experience of PokerStars VR is really one of a kind and its unique immersion and social poker experience has helped create a really engaged community. We’ve seen PokerStars VR go from strength to strength with these updates,” said Severin Rasset, Director of Poker Innovation and Operations at PokerStars. “PokerStars VR will continue its journey by delighting our players and providing a unique thrill and experience. In addition to the Macau Suite and the Showdown Saloon, we now have tables in the Milky Way and the ability to personalize your experience to new levels!”

PokerStars VR is available for download through Oculus and Viveport stores, as well as through Steam, a leading digital content distribution platform.

How would you like to “cash out” when you’re all-in—taking your fair share of cash from the pot when you’ve put all your chips in the middle, side-stepping the run-it-twice nonsense, skipping the whole drag of “dealing out a turn and river and seeing who wins” of poker and just getting on with the next hand?

Among the set of product updates apparently on the way there’s the copycat (throwable objects at the tables is the domain of 888 for the last decade) the catch-up (stack size in big blinds seems long overdue) and the exciting-if-not-shocking (short deck spin and gos seems like a no-brainer).

But one really has our interests piqued: The idea that the operator will offer players an “all-in cashout” functionality at the cash game tables. While details are scant (or, well, non-existent), the supposition here is that when all-in, players can instead opt to “cash out” their equity. Here’s how PRO explains it:

While details are sparse, based on a recent survey sent out to some players and on the new files updated in the online poker client last week, there is reason to believe that PokerStars could soon introduce the concept of allowing players the opportunity to cash out based on their equity when facing an all-in situation in a cash game.
For instance, if a player moves all-in and is 90% favorite on the flop in a pot size of $100, he or she can choose the option to cash out $90—minus a premium which PokerStars will presumably charge from the player.

We’ve seen ideas like this before, but usually as features provided by a third party (remember InsuredPlay?). GG Network is the only real money online poker network today that offers “all-in insurance” built-in. This works a bit differently: Here, players pay a small premium, so in the unlikely case they lose an all-in when a favorite, they get their money back.

The PokerStars initiative suggests something a big different: You “cash out” and take money regardless of the outcome.

So, if the system is implemented like this, what do you think? It would reduce variance, naturally, which can be good for both pros and recreational player alike. Its kind of like “run it twice” on steroids, but rather than just deal a couple of boards, it effectively deals every combination of possible boards—so you always realize exactly the equity you have.

Potentially it could only be triggered if all players in the pot of “all-in cashout” enabled (much like how Run it Twice works today). Or maybe it will be specially designated tables?

Of course, the devil may well be in the details on how much (if all all) of a surcharge the Red Spade adds on top of the service.

Let us know what you think over on Twitter!

Let me transport you back eleven years in telephonic history. People had a blackberries. They called them “crackberries.” People also spent real money on crap ring tones. And everyone still carried separate device to listen to music on the go.

And then Apple changed all that with the launch of the iPhone.

App Stores all of a sudden were a thing. And to promote the platform, a game called Texas Hold’em debuted. It cost $5, it had free-play chips purchases, and it was developed in-house by Apple.

The company used it as a showcase not just of the store and the rich gaming environment available on the device, but also of how developers could monetize their product—through both a sticker price on the app itself, but in-store purchases too. This and other apps like it launched a huge new industry in app development today valued in the billions of dollars.

More than a decade on, and Apple is celebrating the ten year anniversary with a version 2 update

As The Verge points out, that’s a bit weird—both the store and the app are eleven years old, almost to the day. Still, subtraction errors aside, What can you expect in this app update that’s been over a decade in the making? According to the release notes:

Apple’s Texas Hold’em is back! To celebrate the 10 year anniversary of the App Store, we’ve brought back one of its first games, a popular classic. Originally created for iPod, then brought to iPhone, fans will love the polished redesign, featuring new characters, more challenging gameplay, and stunning graphics for the newest iPhone and iPod touch.

And its now completely free to play, so why not install it and give it a try?

You’d not be the only one tempted to give it a spin—right now the app has rocked up to 6th in the “casino” charts; looks like nostalgia is playing its part in returning this hit back to the mainstream.

For a break down on the OG Jungleman video you can check out his interview with Joey Ingram.

My editor just sent me the unedited, spicy version of the video. Thinking about uploading it but don’t know if twi… https://t.co/WDao0Tv2JD— Daniel Cates (@junglemandan) May 12, 2019

But without future ado, here is Marle’s video.

The writing was on the wall (or Twitter) last year, when Doug Polk said he planned to take the summer off from playing poker. At the time it sparked rumors he might be retiring for good.

Since then Polk has been quieter than usual on YouTube, taking a break from content creation, only recently resurfacing on the Poker Life Podcast that Joey Ingram hosts. But he has played some poker and it seemed he was happy traveling and focusing on new things (like crypto).

Now, after busting the WSOP Main Event in 2019, Polk has announced that he is officially retiring from poker, citing anxiety when playing as one of the main reasons for his decision.

For the record appreciate all the kind words, means a lot to me. I’m happy doing some poker content and figuring ou… https://t.co/TFtx1ENBeV— Doug Polk (@DougPolkPoker) July 06, 2019

There has been an outpouring of support and thanks for all that Polk has done for the poker community.

You brought so much good to the poker world already, you don’t owe us anything.

Jen Shahade also took to Twitter to speak to Polk about his decision, which saw Polk give a very genuine answer about not studying enough combined with tilt.

@DougPolkPoker Thanks for your honesty- is it because live poker moves so slow you’re forced to think about random… https://t.co/Gm4NRSdHGW— Jennifer Shahade (@JenShahade) July 06, 2019

@JenShahade I think it’s a few things compounding. If I had to guess it’s not studying or playing, feeling like I n… https://t.co/wr9acx5uWd— Doug Polk (@DougPolkPoker) July 06, 2019

Despite Polk sometimes being a divisive character in the poker world we will certainly miss him. GL for the future.