The World Championship of Online Poker (WCOOP) from PokerStars is one of the most recognized tournament series in online poker, and this year, it is starting earlier than it has in six years. Getting underway on August 22, the 2021 WCOOP is scheduled to run through September 15 with $100 million guaranteed across the series.

WCOOP and its partner series, the Spring Championship of Online Poker (SCOOP), are among the most respected brands in PokerStars’ quiver, and the series’ have grown steadily since their inception back at the dawn of online poker in 2002. The 2019 edition was the biggest ever, capping $100 million for the first time in the series’ history with total prize pools of almost $105 million.

Even fueled by the pandemic, the 2020 edition was a bit smaller than 2019, coming in at just under $100 million in prizes. This year’s version guarantees $100 million out of the gate, so it is guaranteed to be the second biggest WCOOP ever, and could easily surpass the $105 million of 2019. 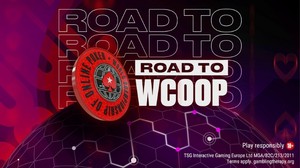 While there is no schedule released yet for the series, there are already WCOOP related promotions running on PokerStars, where the Road to WCOOP is paved with $1 million in tickets. The challenge-based promotion requires players to opt-in to qualify, and then choose a Redemption Points Target to play for—Low, Medium, or High.

Once a player has opted-in and chosen their level, playing poker earns points towards the target. Players who hit their target are entered in a draw for WCOOP tickets, but even if you don’t win a WCOOP ticket, you will still get a ticket to the Ambassador Freeroll on Sunday, August 22.

Opt-in now for the Road to WCOOP to get yourself set for what could be the biggest-ever version of this venerable online poker series. Action in the main series kicks off August 22, and runs through September 15 on the global PokerStars client.

Despite Phil Galfond's recent run of success in heads-up challenges, he continues to find opponents willing to step up to the challenge. The latest competitor to step up to the plate is Brandon Adams, but there’s a twist to this one. Galfond’s previous challenges have been online, played on the Run It Once poker site he developed, but the latest is a live game.

The stakes are similar to Galfond’s last two online battles, at $100/$200 pot limit Omaha, but the big difference will be the venue. Rather than playing out on Run It Once’s virtual felt, the live felt of the new Resorts World Las Vegas will host the challenge.

Adams plans to stream the live affair, and there are a few other twists as well. Rather than being a set number of hands, the two players have agreed to play 40 hours over 5 days, perhaps in a nod to the slower pace of the live game.

A further twist will come if Adams wins the live match. If Adams wins the first match, the two have agreed to immediately sit down to a “Battleship” rematch, where players sit across from each other live, playing heads up on their laptops.

The latest challenge comes on the heels of three wins over the past year, with online pro VeniVidi1993, Ioannis “ActionFreak” Kontonatsios, and Chance Kornuth all falling to the PLO beast. Galfond also started a challenge with businessman Bill Perkins, who recently forced Landon Tice to withdraw from their match, but the Galfond-Perkins match hasn’t gotten very far yet.

Galfond and Adams are already at it, and plan to finish the action out by July 30. It will be interesting to see if Galfond can extend his online challenge dominance onto the live felt.

Koon posted his decision to no longer represent partypoker on Twitter this morning, expressing his gratitude towards the company.

The American-born poker pro signed up with partypoker in 2017 when the operator was undergoing a hiring spree, joining the ranks of Patrick Leonard, Kristen Bicknell, former party ambassadors Sam Trickett and Fedor Holz.

Koon is still thought to be the ambassador of Triton Poker which he joined two years ago.

A big thank you to @JasonKoon for all you’ve done over the last few years as our Ambassador. We wish you all the be… https://t.co/rjX4LdjJ9A— partypoker (@partypoker) July 28, 2021

PokerStars ambassador Lex Veldhuis had a visit with the folks at the CardPlayer's Poker Stories podcast recently to chat about his fairytale rise to the top of the poker streaming world and his life in general. The wide-ranging interview moves from the challenges of being a dad and poker player through some of the nosebleed pots he’s played, and covers a lot of his life on and off the felt in the process.

Veldhuis has become one of the most recognizable names and faces in the poker world since he transitioned from StarCraft to poker early in the online boom. He quickly rose up the ranks, winning the Dutch Poker Open in his home country in 2010 and final tabling the $40,000 40th Anniversary Event at the World Series of Poker (WSOP) in 2009, among other honors.

He was also always very active in the online game, and in 2016, he took his game to the Twitch streets, quickly building one of the biggest channels in the poker category. Streaming as an ambassador for PokerStars, he bagged the record for most viewers of a poker stream in 2020.

Recently, his life took another turn for the better as he announced his marriage on Twitter. Described as “an amazing weekend with the people closest to us” Veldhuis posted his wedding picture and announced a two-week honeymoon in France. But don’t think married life will change him that much—he announced that he’ll be back on the grind right after the honeymoon. “I’ll be back streaming August 15th for a marathon poker session.”

Married man! We had an amazing weekend with the people closest to us. I can’t wait to spend the rest of my life wit… https://t.co/rX5ao5bpGf— Lex Veldhuis (@LexVeldhuis) July 28, 2021

Check out the full interview below, and if you haven’t already done so, head over to his Twitch channel and give him a follow to join one of the biggest Twitch poker communities in the world.

Every organized sport or activity has eras defined by fundamental changes in the game. One of the biggest defining moments in poker was the 2003 World Series of Poker (WSOP) Main Event win by a previously unknown accountant who won his seat in a $40 satellite.

As a result of near-endless replays of the ESPN coverage of the event, Chris Moneymaker became a household name beyond the poker world, and the game of poker moved from the backrooms to a global spectator sport. The win and coverage caused a run on online poker accounts, and the early virtual game boomed as a result.

Watching this recap put together by PokerGO, it’s easy to see that Moneymaker got lucky in several spots, running well to spike his ace against legend Phil Ivey on the final table bubble, just as one example. But the footage also highlights a couple audacious bluffs and strong plays from Moneymaker.

It was a fairytale win at the time, as Moneymaker took out heroes of the game like the aforementioned Ivey, Johnny Chan, and Humberto Brenes before taking down Sammy Farha heads-up. But after it was over, the fairytale only grew as the promise of huge wins from a small online investment brought players out in droves, growing the game to previously unthinkable heights.

They don’t call it The Moneymaker Era for nothing. Catch the highlights of perhaps the most influential Main Event win of all time, the now-mythic 2003 win by the accountant from Nashville.