On Thursday, Pokerstars brought back its novelty cash game variants Showtime Hold’em and Fusion in a multi-table format.

Here is how the new Fusion and Showtime tables look like:

As you can see, every time a player clicks on the background of the Fusion table, a sparkling lightning effect takes place at the table.

This is all possible thanks to Aurora, PokerStars’ new graphics engine released earlier this year. It offers a richer experience, with higher resolution graphics, smoother animations, and new sound effects. Each of the theme tables, game types and poker variants have been tweaked giving players a whole new experience.

For instance, in 6+ Hold’em tables, lanterns glow up every time a player clicks on them and fireworks go off when a player goes all-in. You can check out the animations and sound effects in this article here.

The gala will be hosted by Lon McEachern and Norman Chad and the event will take place in the Brasilia Ballroom that will be open to all WSOP Gold Bracelet winners and VIPs.

Tickets are also available for those looking to attend at the special VIP desk across from the El Burro Borracho take out window.

“It is important we take time out to honor the WSOP’s first 50 years and pay tribute to those that paved the way for where we are today,” said WSOP Executive Director Ty Stewart. “We look forward to getting the poker community together on Saturday and commemorating 50 years of the World Series of Poker.”

Here is a full list of the “50 Greatest Poker Players” in alphabetical order based on last names: 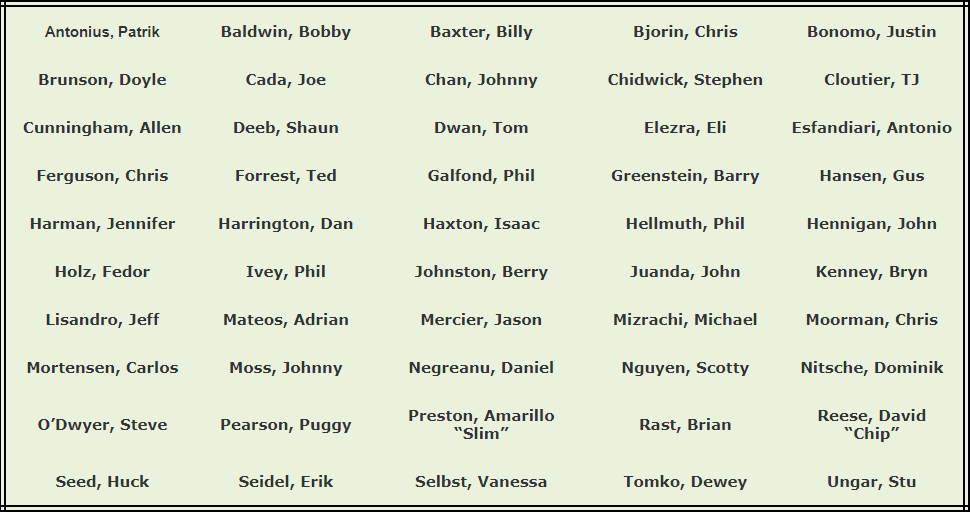 The list was compiled via votes from a panel made up of 26 poker media and industry.

Winners will be announced by McEachern and Chad as per the following categories:

– Most Likely to Succeed

You might well have heard a thing or two out of partypoker the last few weeks. They have made quite a few changes to their online poker room, they’ll have you know. From removing HUDs and stopping hand histories, to a switch to fixed buy-ins and even a move towards real names, the operator has certainly done a great job to stay at the front-and-center of the minds of Euro online poker players.

To get the message out, casino owner, industry vet and recently appointed spokesperson for partypoker, the idiosyncratic Rob Yong has been fielding questions from all corners of the internet. He started off on home ground with a vodcast on the Jeff Gross youtube channel.

That’s all well and good, but call us a skeptic—with Gross as a partypoker ambassador, one might call foul a bit in terms of an independent interview. That’s where our big brother pokerfuse steps in with an hour-long podcast themselves, interviewing not just Yong but also Tom Waters, Head of partypoker.

There’s a full transcript over on pokerfuse, or you can listen to the embed below.

Listen to podcast on spreaker

Now, that might well be enough for you, and to be honest, we’d more than understand if you stopped there. We’re obviously a bit biased, but we think the pokerfuse podcast goes about as in-depth as you need—and there’s a balanced exploration of the various topics at hand. If you just listened to one, that’s the one we’d point you to.

But if you just want more-more-more, Yong has run the gamut—he also did an interview with Lee Davy over on CalvinAyre, where the conversation focuses more on his efforts to build a cross-industry group to work on security. And completing the trifeca is an interview with Sarah Herring for PokerNews, shot live on Facebook, where the convo touches a bit more on changes to live.

So there you have it—at least four hours of the Yong.

Living poker legend Phil Ivey is leading the pack in the star-studded $50,000 Poker Players Championship at the World Series of Poker 2019.

As 38 players bagged their chips at the end of day 2, Phil, already owner of ten World Series of Poker bracelets, had a narrow lead over the field with 1.25 million chips, according to the official chip counts from WSOP/PokerNews.

He sits just ahead of six-times WSOP bracelet winner John Hennigan and seasoned pros Christopher Vitch and David Oppenheim, each who have just over the 1 million chip mark.

The $50k Championship is always something of a who’s whos of the poker world, and a highlight for railbirds around the world who want to watch some of the world’s best online poker pros do battle.

Just missing out on the final day’s action is none-other than fan favorite Tom “Durrrr” Dwan, who snuck in just as the late registration was closing. As he announced on Twitter, its his first WSOP entry for quite some time.

Just bought in to my first tournament at the wsop in quite a long time.

Unfortunately, the last-gen online destroyer-slash-invite-only nosebleed Asian live cash grinder donked out 42nd to miss out on his shot at a deep WSOP run.

The action returns today at 2pm Vegas time where they will play six levels. On Thursday, they’ll be back to play down to six; the final table will then run on Friday.

The format is a classic mixed rotation eight-game, with 100 minute levels so there’s lots of space for everyone to flex. The top 12 get paid, with a min-cash at $72k and a first place prize just over a $1 million.

Doug Polk returns from his travels and hits up the Poker Life Podcast for a two and a half hour marathon podcast.

Although the pair get into a lot of good topics my favorite moment came at the 2 hours 22 min mark Polk finally cuts loose, talking about all the times he has been blamed for other people’s problems. And to be honest, I tend to agree with him: Polk says no-one ever seems to take responsibility to their actions—rather they would rather blame Polk’s editing for their mistakes.

For instance, Ingram and Polk end up talking about Alex Foxen who wanted Polk to remove a video of him that suggested he colluded with his girlfriend Kristen Bicknell last summer.

Back in July 2018 Polk posted a video alleging that real life poker couple Bicknell (who is signed by partypoker) and Foxen colluded during a three way pot at The Venetian. Their alleged soft-play and collusion got the poker community riled up at the time which promoted Polk’s video.

Polk has also made videos on an alleged angle-shoot by Alec Torelli and of course the more rake is better debate.

You can watch the Poker Life Podcast in all its glory (yes, the pink headphone are back!) below.

One Youtube viewer has taken the time to add time stamps in the comments section so you can jump to certain topics if you don’t have time to sit through it all.

It’s vlog 26 from the World Series of Poker (WSOP) as Daniel Negreanu continues to crank out the content.

In this episode Negreanu is seated on the same table as Phil Ivey as they enter a PLO tournament.

Negreanu also tells us how one of his vlogs has been removed from YouTube (Day 19) as it showed him playing on the online WSOP tables.

Negreanu starts by saying he won’t mention “the poker game that shall not be named” aka online poker but shortly afterwards he shows his iPad as he plays online against his wife Amanda Negreanu.

In early June Jaime Staples and Andrew Neeme both had videos removed due to them showing/ talking about online poker. Staples had over 100 videos removed, a huge blow for the content creator.

Just had my two #ultimatesweat giveaway videos from YouTube taken down because of some random TofC rule about linki… https://t.co/IF7YfKwK96— Jaime Staples (@jaimestaples) May 31, 2019

I also just had one of my videos removed today. Getting pretty concerned here. https://t.co/ZawHfHqUbn— Andrew Neeme (@andrewneeme) May 31, 2019